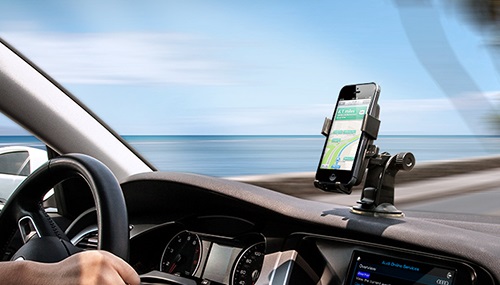 I travel. I travel a lot.  Living away from family will ensure you a life of traveling.  And if you need to see specialists or want to take the kids to a zoo or aquarium exhibit, living in a small town will also help you to get your fair share of traveling.  And because of all of these things, I travel across most of the United States.

One thing that has allowed for easier travel over the years is GPS.  I used to think that driving with printed directions was nice, but looking for that next road sign at night only added to the stress of long-distance travel.  As soon as a deal on a GPS showed up, I rushed to the store and purchased one.  It has forever changed travel for me.

Fast forward 7 years and now most of us don’t have or no longer use a dedicated GPS unit.  Our phones do a great job – maybe even a better job – than the GPS devices we had years ago.  I used the pre-installed apps for directions for years, until I realized there were even better apps, like Waze Social GPS, available for iPhone & iPad, Android, and Windows Phone.

Once I realized how beneficial a GPS app was, I realized how much I missed the GPS that was mounted on the car dash or window.  I tried a cheap car mount, but it kept falling off, and eventually broke.  For about an hour, I researched and read review after review, and concluded that the iOttie One-Touch Car Mount was the best smartphone car mount on the market.

When I received it, I immediately put it to the test.  I was amazed at how well the suction cup stuck to the top of my textured dashboard.  It literally just sticks and suctions in place.  The heat & cold have yet to cause it to un-stick.  The adjustments were simple – an axis for changing the direction it faces, and an axis for rotating it portrait & landscape.  The simple-designed rotating discs make it very easy to tighten and loosen the 2 directional faces.

There’s a sliding ‘cup-like’ holder for the bottom, so that you can plug in a power cord, and it never gets in the way.

The best feature is the clip.  There’s a button on the front-face of the clip.  When you place your phone into the clip, it pushes the button, and the 2 grasps on the sides immediately clamp down on the phone, and it will hold it until you intentionally un-clip it.  To pull the phone out, simply push the 2 spring-buttons on the side, and it releases the clip/clamps.

The iOttie One-Touch Car Mount is the best smartphone car mount that I’ve ever owned.   The 4.5 star rating it holds on internet retailer sites proves that I’m not the only one that believes this.  Get your iOttie car mount today!

If you have a large phone, like a Galaxy Note II, Note III, Galaxy S4, HTC One Max, etc., Meritline has a limited-time deal on this larger model iOttie car mount.  Normally $19.99. Only $13.50 after coupon code MLCQ20XN + Free shipping!