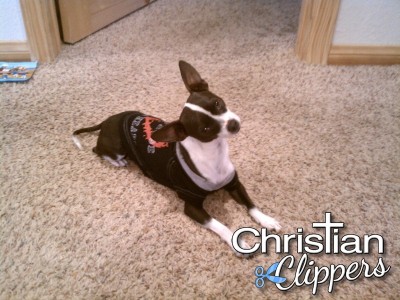 You’ve seen pictures of him but know nothing about him. I’m finally getting around to introducing you to him and he’s almost 2 years old, LOL! His full name is “Buzz Lightyear”. He appears to be full deer Chihuahua but we don’t know for sure.  We adopted him when he was 4 months old. I always look at him and think “I can’t believe such a great looking dog was homeless”.

At 6 1/2 pounds, he’s a tough little guy. Super loving but definitely has “little dog syndrome”. It all started when the kids really really really wanted a dog. I had to really think about this decision because with three kids, I had little time to clean up after a dog.  My preference was to get a little dog so that his poo poo was small. After all, I’ve cleaned up enough poo poo messes with the kids. My husband and I finally decided to hunt for a new dog and both agreed it should be a small one.

We knew we wanted to adopt a homeless pet because Lord knows there’s a ton of homeless dogs in America.  That is when we stumbled upon this sweet little guy.  We fell in love with his markings. I’ve never seen such a beautifully colored Chihuahua before. It took a few weeks before we actually got him home because they wanted to get him neutered before we took him.  We kept him a secret from the kids because we wanted to surprise them.

One thing I didn’t think about was the expense of this little guy. His adoption fees were very reasonable but we still needed to get a crate, a bed, toys, a leash and the list goes on. I immediately got online to search for online pets deals to save us some money. Thankfully we were able to save quite a bit.

The day came when we got to surprise the kids. We didn’t just tell them, we hid him under a blanket a surprised them. They were shocked and excited all in one.  He was everything they wanted in a dog. To this day, he is their baby. They dress him up in baby clothes and carry him around wrapped in a blanket like a baby doll. He loves it!

That’s the story of how Buzz became a part of our family.  He’s only 6 1/2 lbs and is as happy as he can be. We love him so much and pray that he will be with us for many years to come.

Disclosure: This is a sponsored post. All opinions are my own. Regardless, I only recommend products or services I use personally and believe will be good for my readers. I am disclosing this in accordance with the Federal Trade Commission.