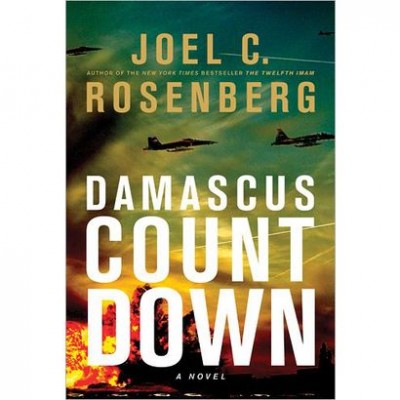 The third book in the Twelfth Imam Series is now available, Damascus Countdown.  This is such an exciting series especially during the end times.  If you love Biblical fiction, this is the series for you!

Israel successfully launches a first strike on Iran, taking out all of their nuclear sites and six of their nuclear warheads. American president William Jackson threatens to support a U.N. Security Council resolution condemning the Jewish State for unprovoked and unwarranted acts of aggression. And the Twelfth Imam prepares to order a genocidal retaliation. Meanwhile, CIA operative David Shirazi has infiltrated the Iranian regime and intercepted top secret intelligence indicating that two Iranian nuclear warheads survived the attack and have been moved to a secure and undisclosed location. In danger not only from the ongoing war between Israel and Iran but also from the increasingly hostile governments in multiple countries, Shirazi and his team are in a race against time to find the remaining nuclear warheads before the most cataclysmic event in the history of the Middle East comes to pass.

I think I set the record with this book. The previous one was read in 7 days and this one took only 4 days. It’s hard to put the book down because it’s so full of suspense and action.  I’m looking forward to more books!

About the author: Joel C. Rosenberg is the New York Times best-selling author of seven novels—The Last Jihad, The Last Days, The Ezekiel Option, The Copper Scroll, Dead Heat, The Twelfth Imam, and The Tehran Initiative—and two nonfiction books, Epicenter and Inside the Revolution, with more than 2.5 million copies sold. The Ezekiel Option received the Gold Medallion award as the “Best Novel of 2006” from the Evangelical Christian Publishers Association.

The suggested retail price for this book is $26.99. Amazon has it marked down to $16.19! That’s an amazing price for this Hardcover book. For more information visit Tyndale today!

Disclosure: I received a copy of this book to facilitate this review. Regardless, I only recommend products or services I use personally and believe will be good for my readers. I am disclosing this in accordance with the Federal Trade Commission.