Do You See Similarities Between Santa and Jesus? 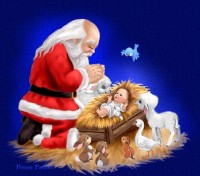 I was laying in bed this morning and the similarities between Santa and Jesus popped in my head.  I don’t know why it happened today because I’m 33 years old and have had tons of time to think about it. I guess this was just one of the moments when it actually made sense in my head :)!

Santa who is also known as Saint Nicholas is a legendary figure that brings gifts to kids that were good all year on Christmas Eve (I’m sure you all knew that ;)).  Let’s start with Saint Nicholas. He comes from a christian figure named Saint Nicholas of Myra.  Nicholas was a devoted christian and was known for his generosity to the poor. His appearance is taken from a few other figures in the past but I’m not going to get into that because it’s irrelevant to where I’m going with this.

The Christmas tree, wreath, garlands, etc symbolizes eternal life in many cultures. Tree worship was common among pagans and it followed them through their conversion to Christianity.  The decorating comes from many other backgrounds, you can view more about them from the Christmas Tree article on Wikipedia.

Now, here is the connection to Christ. Santa is a believer and he gives presents to good kids all around the world. We are all the children of Jesus and we have eternal life when we believe in him (John 3:16).  Eternal life is the greatest gift of all but children wouldn’t understand that so they receive physical gifts.

If people don’t believe in Jesus, then why would they celebrate Christmas?  It’s clear that Christmas is focused on Christ, it’s in the word “Christmas”. The Christmas songs glorify the birth of Jesus.  This is where Santa comes in. He’s someone you can’t see and he can accomplish miracles.  It’s the same with Jesus, we don’t see Him and He can do anything.

So is Santa just someone to cover up what Jesus is actually doing? People don’t want to follow the ways of Jesus but they want to reap the rewards?

A few years ago, we decided to tell our kid that santa was not real. They know that we celebrate the birth of Christ but there was no true explanation of where santa came in. According to the way santa is portrayed he can perform miracles and be in one place at all times.  We were worried that when the kids found out santa wasn’t real, they would think Jesus wasn’t either.  It took a while for the kids to believe santa was fake. We didn’t want to spoil the fun, we just wanted the kids to focus on the true meaning of Christmas.  We explained that Jesus blesses us with gifts on His birthday. The gifts are truly from Jesus because He provides for us.