Do you Know about the Faith Monument in Plymouth? 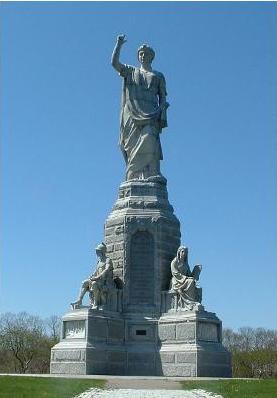 Have you seen or heard of this monument? This is one of the many things we learned about in the new documentary, Monumental. The documentary by Kirk Cameron shows the interpretation of the history and values of those it commemorates.

Our country was founded on God and this monument proves it.  Here’s an explanation of the monument from Wikipedia:

The monument, which faces northeast to Plymouth Harbor (and, roughly, towards Plymouth, England), sits in the center of a circular drive, which is accessed from Allerton Street from the east. The plan of the principal pedestal is octagonal, with four small, and four large faces; from the small faces project four buttresses. On the main pedestal stands the heroic figure of “Faith” with her right hand pointing toward heaven and her left hand clutching the Bible. Upon the four buttresses also are seated figures emblematical of the principles upon which the Pilgrims founded their Commonwealth, each having a symbol referring to the Bible that “Faith” possesses; counter-clockwise from the east are Freedom, Morality, Law and Education. Each was carved from a solid block of granite, posed in the sitting position upon chairs with a high relief on either side of minor characteristics. Under “Liberty” stand “Tyranny Overthrown” and “Peace;” under “Morality” stand “Prophet” and “Evangelist;” under “Law” stand “Justice” and “Mercy;” and under “Education” are “Youth” and “Wisdom.” On the face of the buttresses, beneath these figures are high reliefs in marble, representing scenes from Pilgrim history. Under “Freedom” is “Landing;” under “Morality” is “Embarcation;” under “Law” is “Treaty;” and under “Education” is “Compact.” Upon the four faces of the main pedestal are large panels for records. The front panel is inscribed as follows: “National Monument to the Forefathers. Erected by a grateful people in remembrance of their labors, sacrifices and sufferings for the cause of civil and religious liberty.” The right and left panels contain the names of those who came over in the Mayflower. The rear panel, which was not engraved until recently, contains a quote from Governor William Bradford’s famous history, Of Plymouth Plantation.

Doesn’t that give you the chills? I can’t believe how much this country covers up God.  All I have to say is that you need to buy Monumental right away so you can get our history right. The most important thing is to educated the kids the proper way.