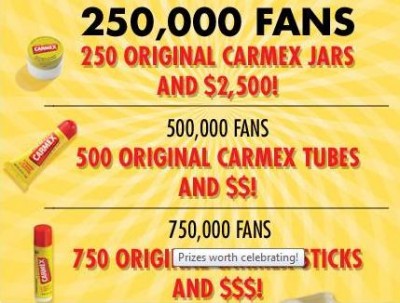 Carmex is celebrating its 75th Anniversary this year. They’re so thankful and want to reward customers and fans for supporting them through nearly a century by hosting a promotion on Facebook: 75 years with 750,000 Carmex Fans . They hope to reach 750,000 Carmex Fans to celebrate their monumental anniversary. Once certain fan milestones are unlocked, they’ll be giving away great Carmex prizes as well as CASH.

Carmex can’t give away the specific details of the prizes but because I’m a Carmex blogger, they’re giving me a few hints. When they unlocked the first milestone of 250,000 fans, they awarded the grand prize winner with $2,500. I can only imagine the cash amount will be increased with the next two milestones they’re trying to achieve.  If 250,000 was $2500, then 500,000 fans should be more and 750,000 should be even more then that!

Head on over to their 75 years with 750,000 Carmex Fans Facebook page and make sure you “like” them and then enter your info to be notified when they reach their milestones so you can enter to win! Share this with friends and family to speed up the process!

I can't believe Carmex has been on the market for 75 years! I love their lip balms and sticks.

I had no idea they have been around for that long!

Liz @ A Nut in a Nutshell

I love them. I have at least 6 tubes at a time here because I can't be without.