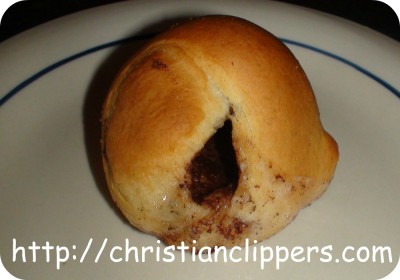 Here’s a great recipe to teach your children the true meaning of Easter, It gives them more of a visual when they see the empty tomb. They’re also really yummy too!

The point of Easter has become so saturated with the Easter bunny, Easter baskets and so on. I’m one of those that still participates in the fun of it but make sure the kids know the true meaning of “Jesus has Risen”.

I had a few of mine explode because they weren’t wrapped tightly. If you’re concerned about them exploding, you can wrap each marshmallow in two crescent rolls to ensure they are completely wrapped.

I love the Resurrection Rolls, too. And I feel that Easter (and Christmas) is far to commercialized.

I love that! What a great idea.

It's a great idea. I was trying to explain this to my daughter the other week.

Rachel @ Following In My Shoes

We have been using the Resurrection Eggs for the past 2-3 weeks; but my kids would LOVE an edible object lesson like this. I had heard of these rolls but didn't realize they were so simple. Thanks for sharing!