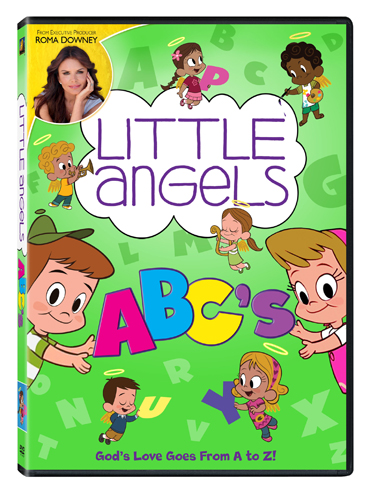 I’m so excited to announce that the animated DVD series “Little Angels” is being released at a store near you on February 14, 2012! This series has been created for preschool aged children to teach practical learning skills like ABCs, numbers and the love of God.

Executive Producer Roma Downey (Touched by an Angel) is excited to bring this new series to pre-schoolers. She states “For many years I had the privilege of playing an angel on television, bringing a message of God’s love to millions of Americans.  As a mother, I have longed to be part of a project that would help to bring that same message to children by not only teaching them the foundations of education – but also providing strong examples of good behavior.  Little Angels does just that.  It offers critical learning skills through the lens of timeless and age appropriate Bible stories. I only wish this series had been available when my kids were younger!”

Synopsis: Preschool twins Alex and Zoe are blessed to have eight Little Angels watching over them – literally!   These Little Angels live on the ceiling of their bedroom, painted there so they are the first things the kids see when they wake up in the morning and the last thing they see before they fall asleep at night.  The angels come to life when the children need them most, helping guide them through the challenges of their young lives.

In honor of the release of this series, Twentieth Century Fox Home Entertainment has sent us all sorts of goodies to have a “Little Angel” party with our friends. We received angel wings, halos, a Walmart gift card, several activity sheets and more!

I’m so excited about the release of this new series. I love that people like Roma Downey treasure the word of God, it’s the only Truth we have in this world.

Our party is scheduled for Saturday (2/11/12) and we have a group of ten little boys and girls (including my 3 kiddos) coming to enjoy this wonderful release. I’m still deciding on what we will eat, it will most likely be pizza.

Stay tuned as I will be posting all the details of our party. In the meantime, share this new release with friends and family. This is a great opportunity to help others learn the love of God.  Check out the Little Angels website for more products that are available. Make sure and “Like” Little Angels on Facebook and share it with your friends!